With the backing of the Lyman & Ash law firm, I launched the nonprofit Philadelphia Obituary Project in 2016. The project shines a positive light on the lives of the city’s homicide victims — in contrast to the victim-blaming that often occurs in the media — and provides a measure of closure to survivors. I currently serve as editor and as a board member of the nonprofit organization that funds the project.

As founding editor, I:

To donate to the Philadelphia Obituary Project, please click the image below and fill out the contact form. I built PassyunkPost.com from nothing into South Philadelphia’s go-to source for news about development, restaurants, events, retail, openings, closings and quality of life issues from 2013 until 2016, when I moved away to Spain. The audience reached up to 60,000 unique visitors a month, averaging more than a million page views a year. I attracted more than 40 regular advertisers and 30 contributing writers and broke dozens of stories that got picked up by other media. Not bad for a side project when I had a full-time job. I sold it in 2017.

Fox29 praised us for our effort to get negligent dog owners to pick up after their pets (aka the Dog Shit Crusade)
http://www.myfoxphilly.com/story/23408900/passyunk-community-deals-with-dog-owners-who-dont-clean-up
– Sept. 12, 2013

WHYY‘s Newsworks.org invited us to be an expert in a chat about East Passyunk’s transformation
http://www.newsworks.org/index.php/homepage-feature/item/52418
– March 20, 2013

The tech-news website Technically Philly highlighted us in a story and video about the increasing presence of hyperlocal news coverage.
http://technical.ly/philly/2013/05/06/neighborhood-news-makes-a-difference/
– May 6, 2013 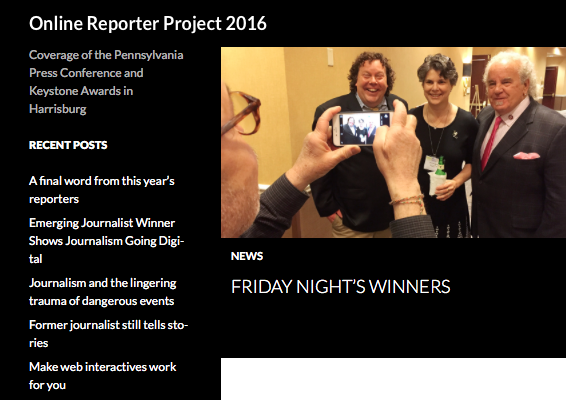 I launched keystoneawards.com in 2015 as part of my work with The Online Reporter Project internship program through the Pennsylvania Press Association.